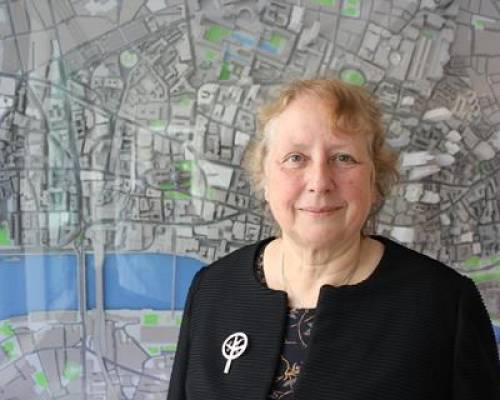 The City of London has announced that chief planning officer Annie Hampson is to retire after more than three decades overseeing development in the Square Mile.

She will step down from her role at the helm of the corporation’s 40-strong development management team at the end of March.

Hampson joined the City in 1989 after stints at Surrey County Council, Islington and the Royal Borough of Kensington & Chelsea.

Last year Hampson (pictured) gave her endorsement to Fosters’ Tulip tourist tower, only for the City’s support to be blocked by mayor of London Sadiq Khan.

Her time at the City has also included the rebuilding of St Ethelburga’s and other buildings following the 1993 bombings, and the refurbishment of listed buildings such as the Royal Exchange, the Bank of England, Midland Bank, the Guildhall and the Port of London Authority building.

Alastair Moss, who chairs the corporation’s planning and transportation committee, said Hampson would leave the authority with a “proud and long-standing legacy” that deserved the capital’s gratitude.

She took over from former planning chief Peter Rees, who stepped down in 2014.