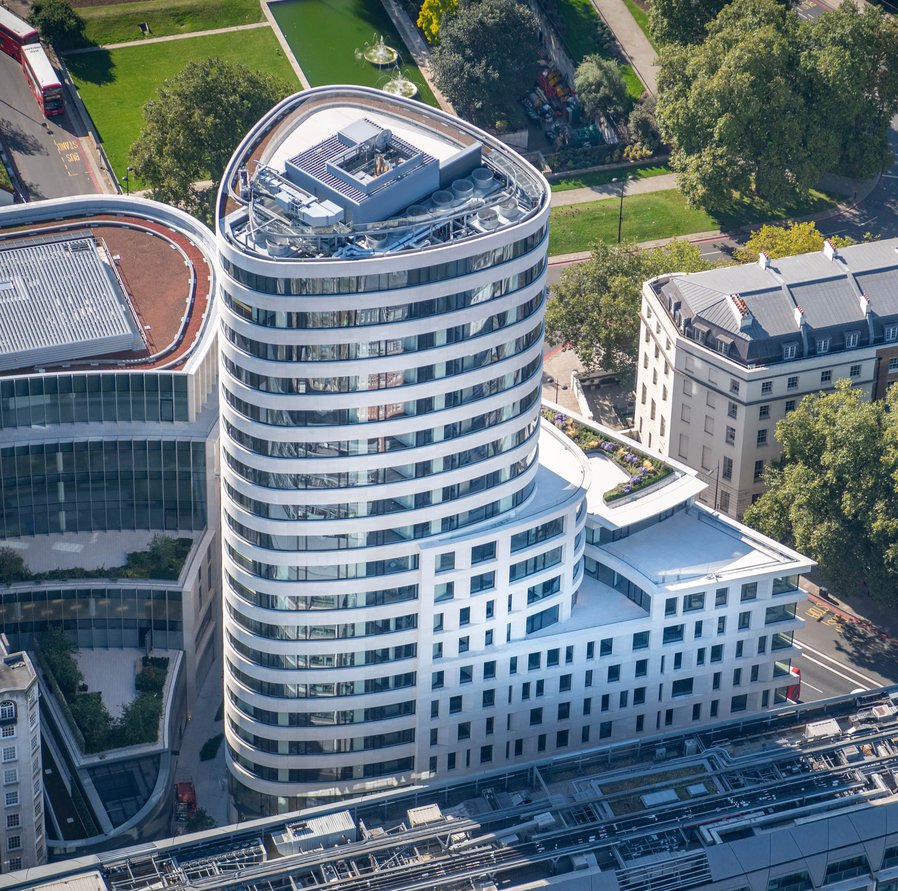 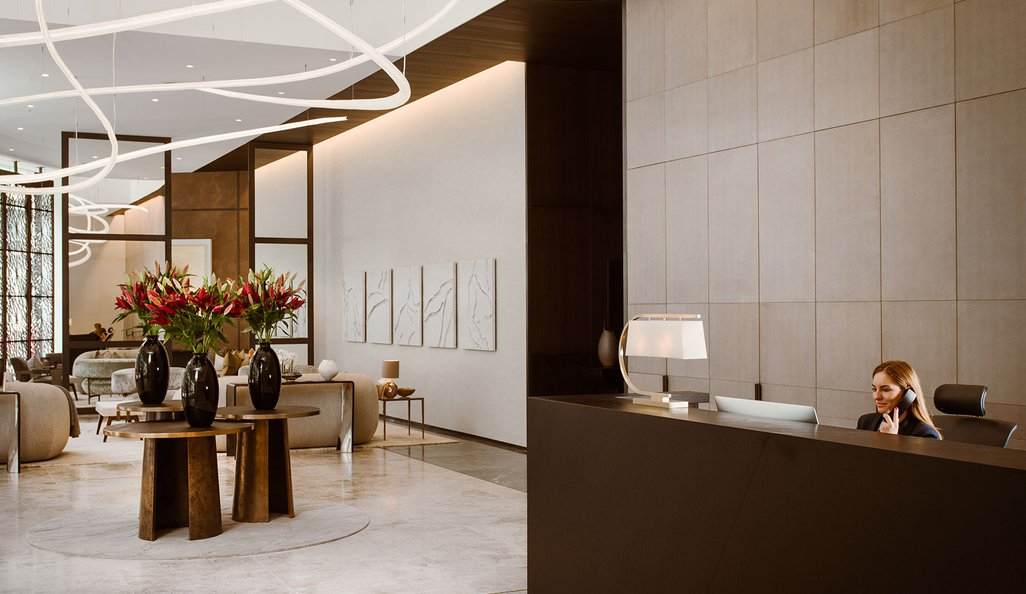 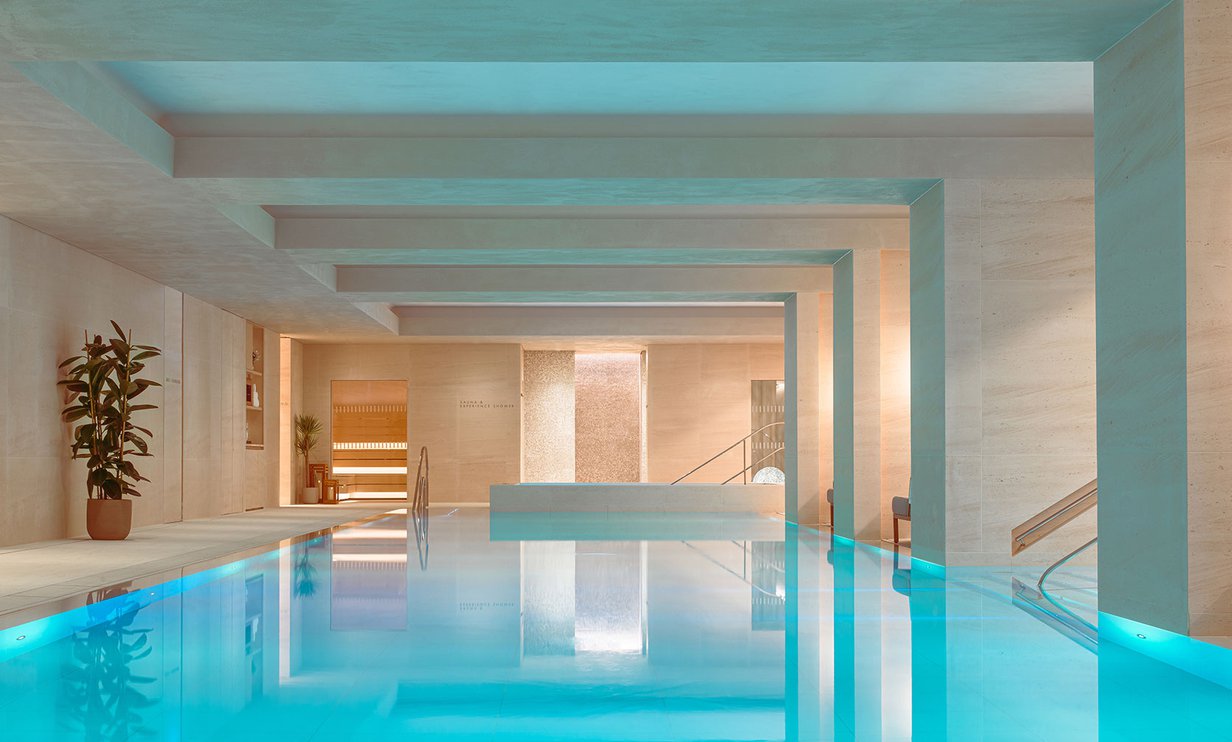 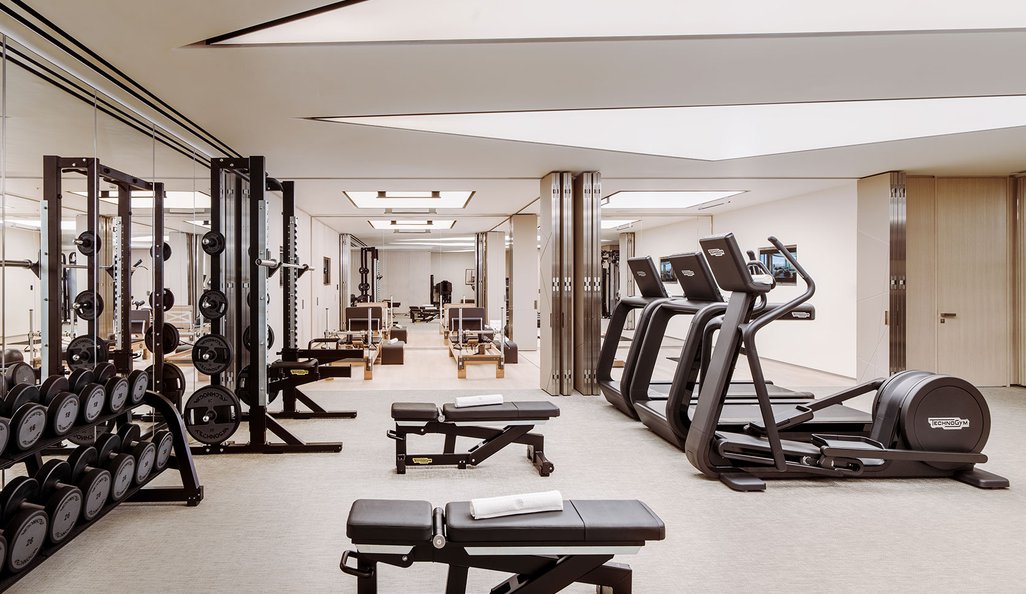 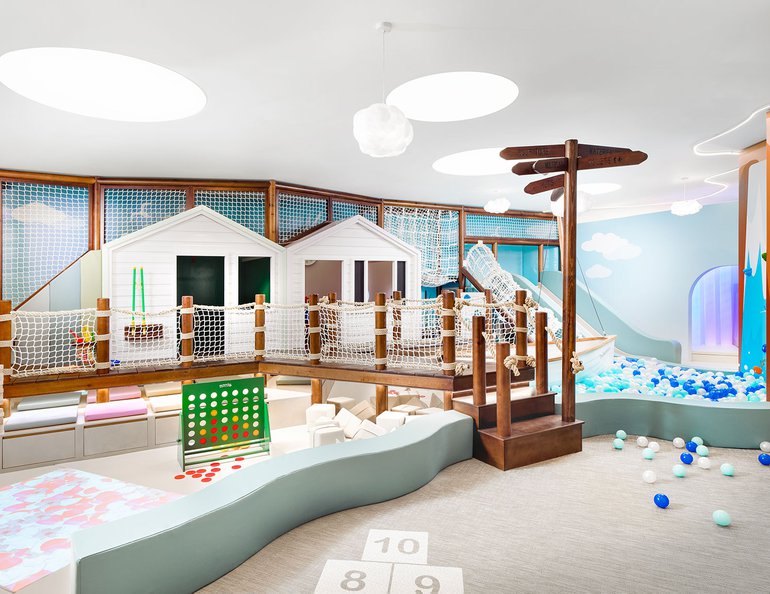 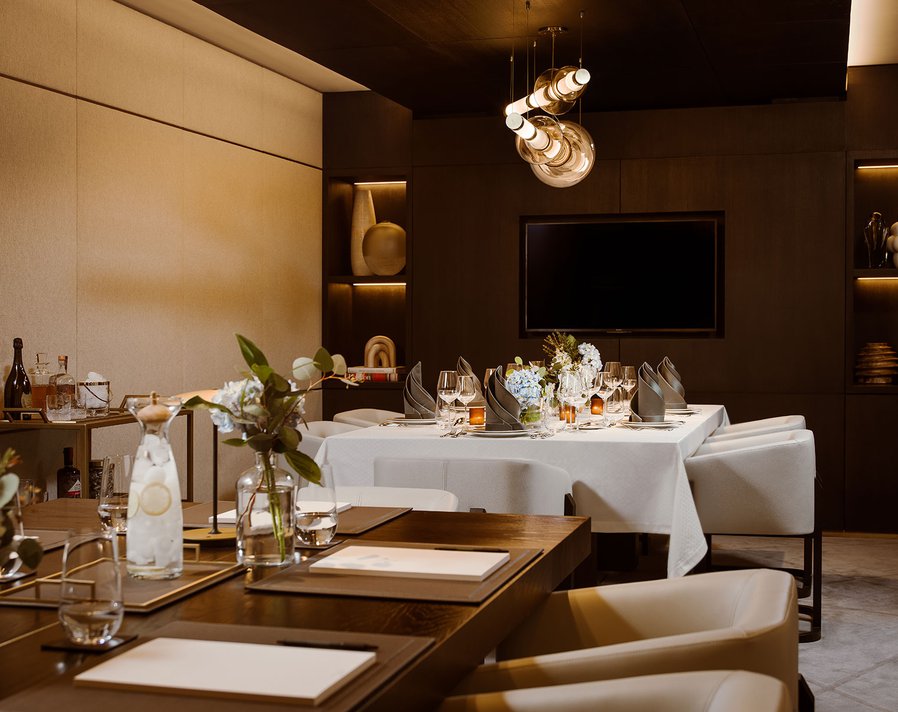 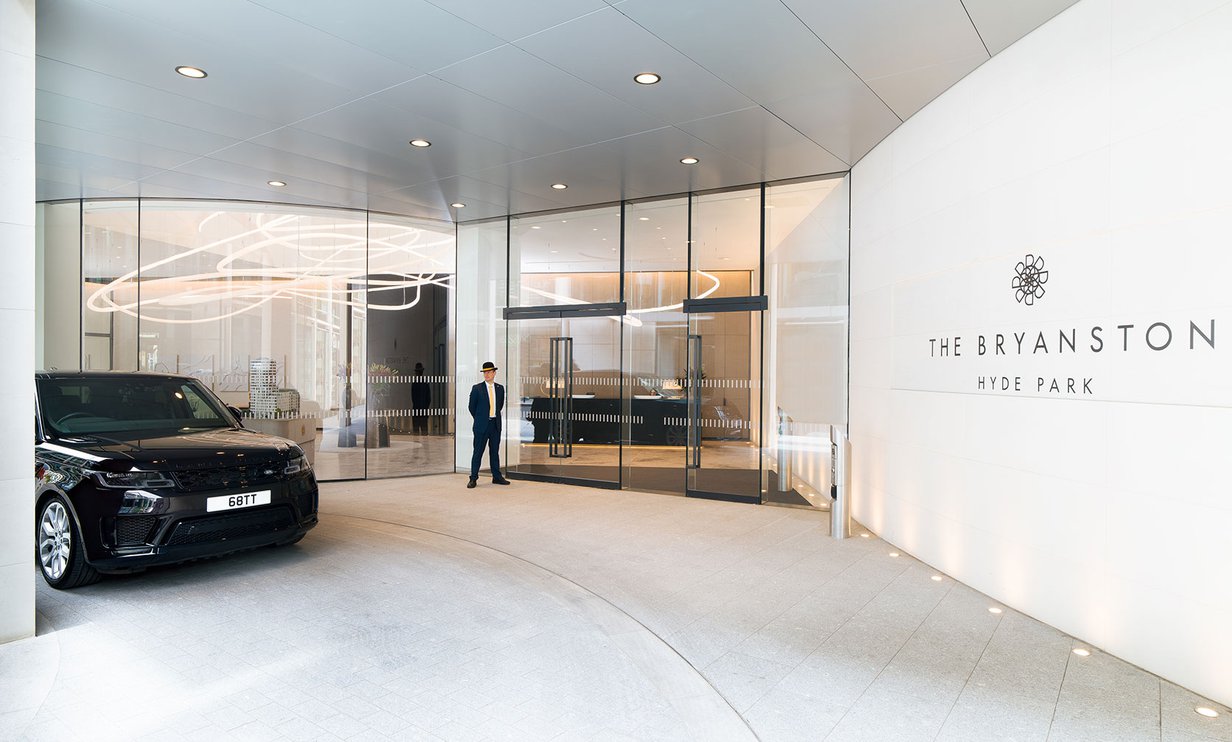 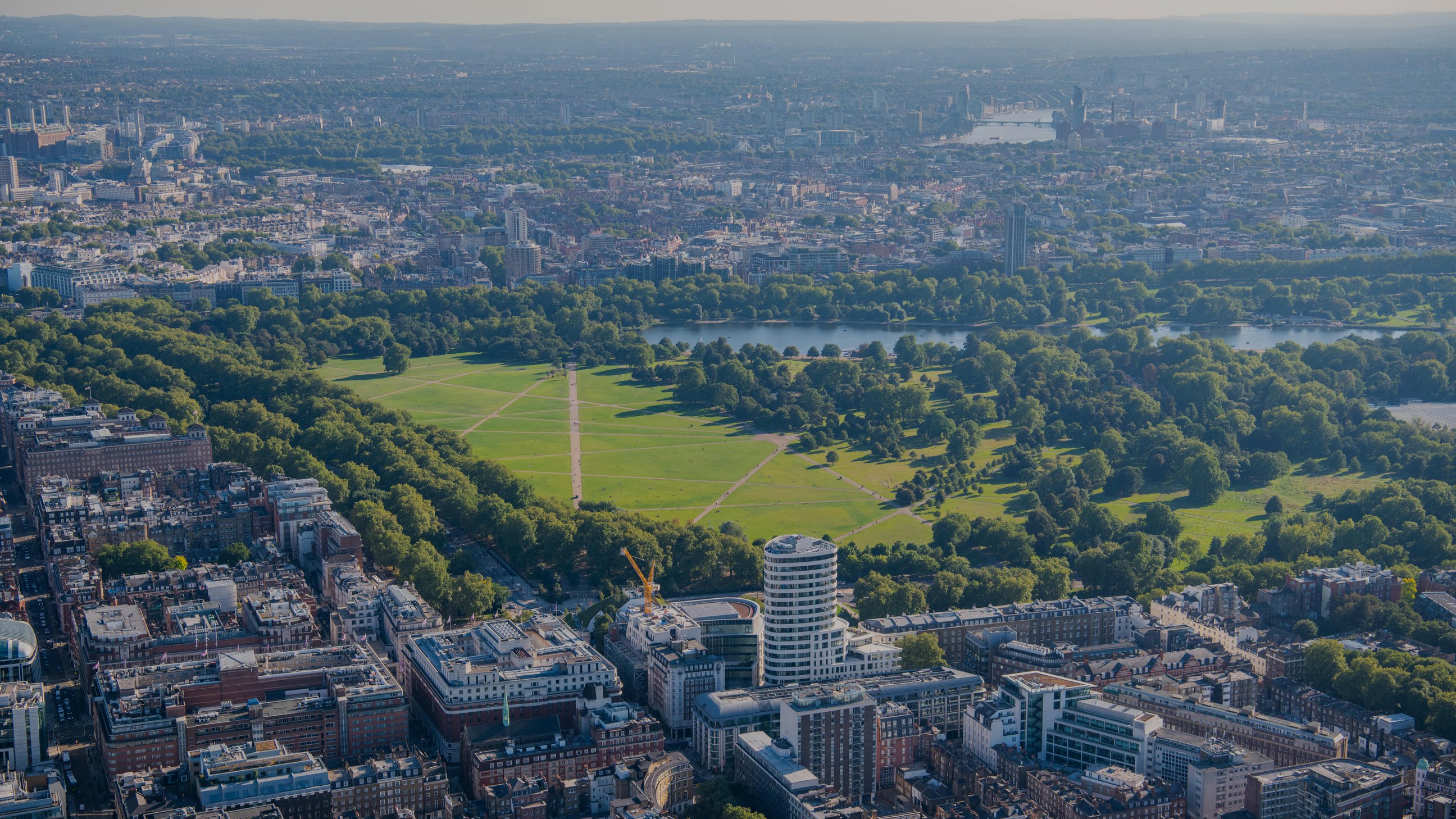 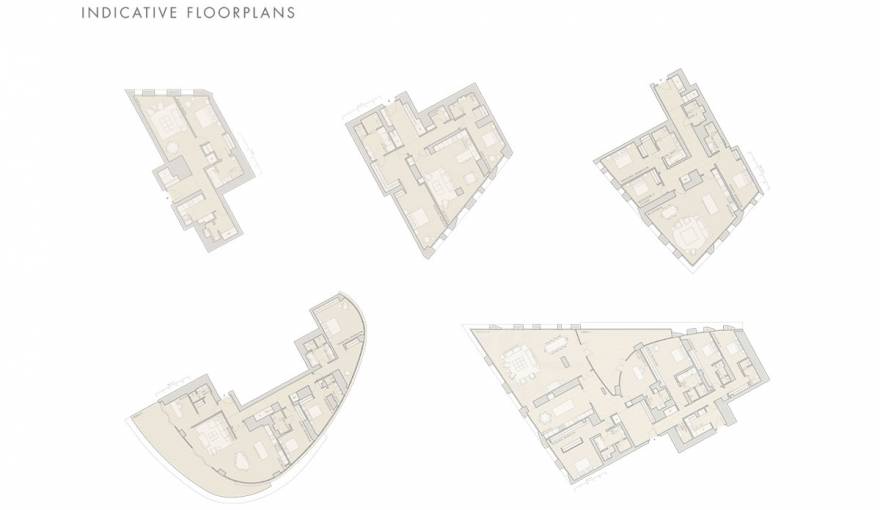 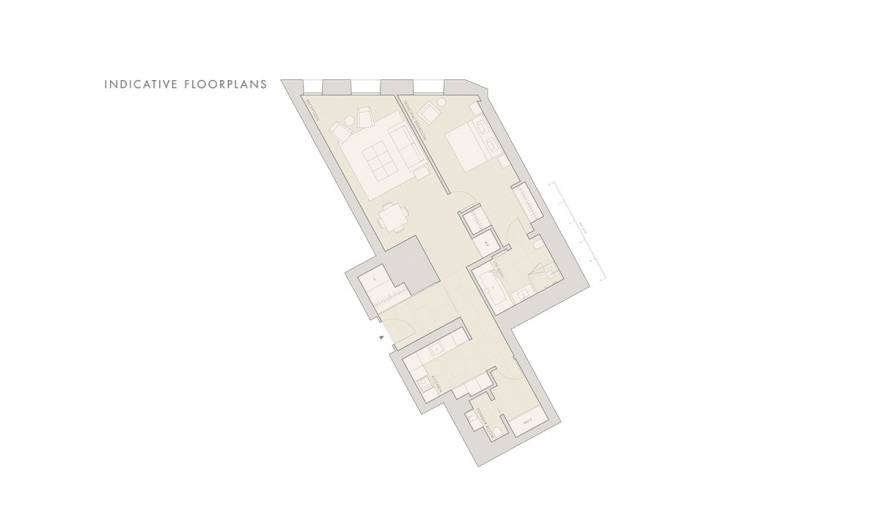 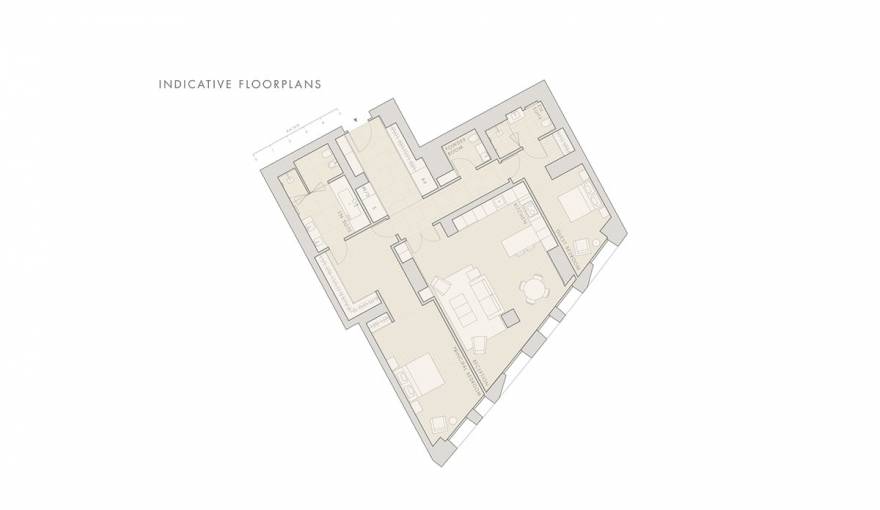 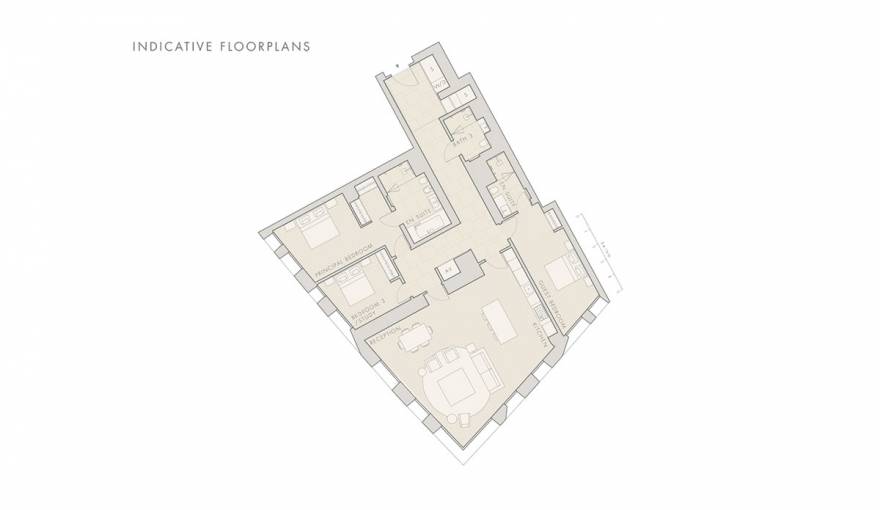 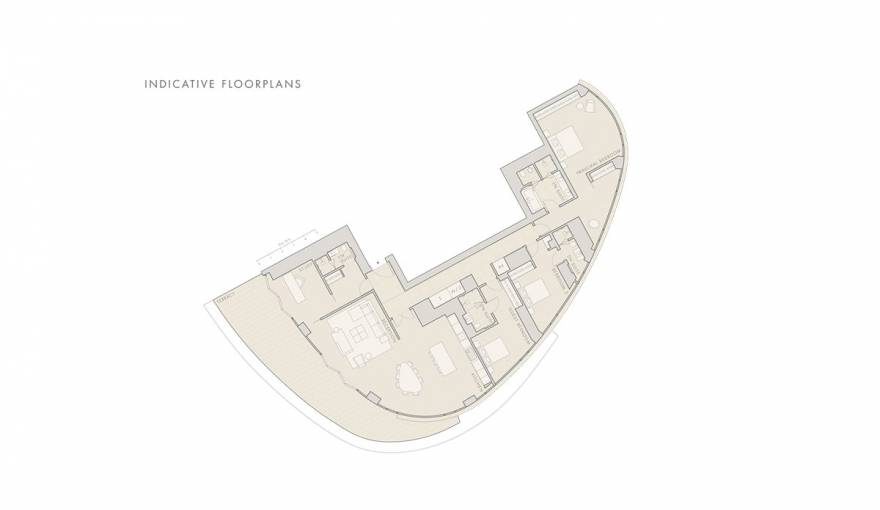 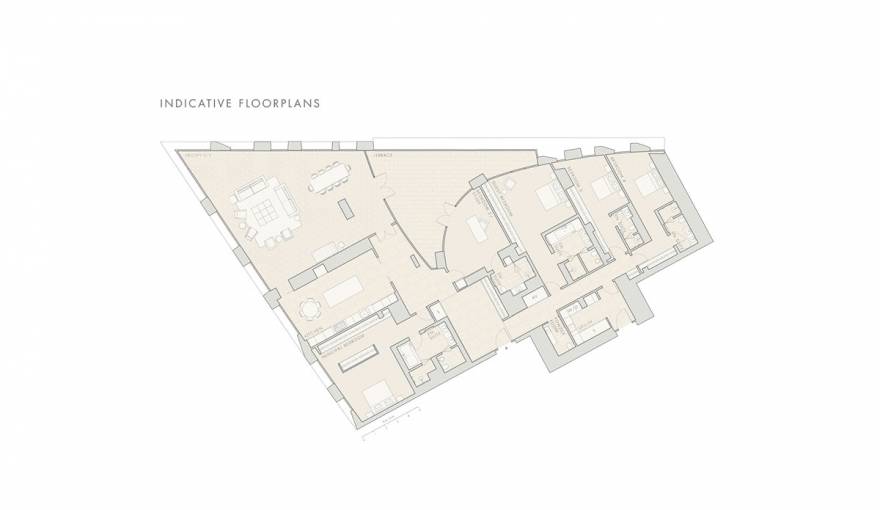 Properties in this development on 27 November 2022

Access to the very best of London, within walking distance and beyond.

The Bryanston is part of the Marble Arch Place masterplan, an exceptional mixed-use development, marking a new chapter for this historic London crossroads. Architect Rafael Viñoly’s remarkable vision introduces a seamless transition from Hyde Park into the West End and Mayfair Village.

The Bryanston itself is a collection of 54 residences affording a spectacular location and extraordinary views. It is composed of two main elements: the podium with its gracefully tiered terraces, and the 18-storey tower with southerly views across Hyde Park and beyond.

5 Marble Arch consists of seven floors of premium office space, which has been pre-let to Bridgepoint, a major European private equity firm.

There is a total of 54,000 sq ft of retail and leisure at Marble Arch Place, consisting of bars and restaurants, coffee shops and leisure spaces, all opening out on to a new pedestrianised public realm.

The Bryanston residents are minutes away from some of the finest retail experiences in Europe. The choice and quality on offer are superb, from Selfridges, Britain’s premier department store, to upscale fashion boutiques like Chanel and Hermès, to the more quirky independent shops of Marylebone.

There are notable educational establishments of London within a small radius of The Bryanston — from leading independent schools like Wetherby Preparatory School and Francis Holland School, to eminent universities such as University College London, Imperial College and the University of Westminster.

The nearby Mayfair village hosts the greatest concentration of five-star hotels and Michelin-starred restaurants in London. Enjoy out-of-this world cocktails at the elegant bar within the Connaught Hotel, or sample the freshest seafood and oysters at Scott’s, the 150-year-old establishment that was one of novelist Ian Fleming’s favourite haunts.

Whether you’re popping out from The Bryanston for afternoon tea or an evening aperitif, you’re extremely well served for hotels and members’ clubs in the neighbourhood. From famous five-star institutions such as Claridge’s and The Dorchester, to members-only havens like Home House, 5 Hertford Street and Annabel’s.

One of London’s most notable landmarks, Marble Arch, is something of a ‘welcome home’ for Bryanston residents. At one time, it was the grand entrance gate to Buckingham Palace, but was relocated here in 1851. You’re also a walk away from Speaker’s Corner, the Royal Albert Hall and, of course, Buckingham Palace itself.

Marble Arch Underground station is on your doorstep. The new £18bn Crossrail service is close at hand too, with stops nearby at Bond Street and Paddington. The Heathrow Express from Paddington will take you to London’s Heathrow airport in 15 minutes. Or by car, the airport is 27km away, a journey that takes from 35 minutes. Whatever your travel needs, our concierge can make all necessary arrangements for you.

The beautiful 350-acre Hyde Park is on your doorstep. This is the largest of four Royal Parks in central London, a place where many threads of the capital’s history meet. A green oasis in the heart of the city, Hyde Park is home to over 4,000 trees, a sizable lake, ornamental flower gardens, as well as numerous buildings and monuments of interest. It’s a wonderful place to walk, exercise or meditate. Rowing or boating are available in the 18th-century Serpentine, London’s largest boating lake.

Bordering Hyde Park, Mayfair is an historic, upscale district of elegant Georgian townhouses, exclusive hotels and restaurants, waiting for you to enjoy. Mayfair’s world-famous retailers include the bespoke tailors of Savile Row and luxury international fashion houses on Bond Street. With 285 acres, 144 streets, 26 Michelin Stars and 5,200 residents, it’s the epitome of taste, fashion and luxury.

Walk on a little further from The Bryanston and you’ll be in Marylebone, with its relaxed, village feel. There are pockets of leafy green parks, regular farmers’ markets and small independent shops you wouldn’t find anywhere else in London. It is home to the Chiltern Fire House hotel and restaurant, the Wallace Collection museum, and the Edwardian Daunt Books, said to be the world’s first bespoke bookshop. 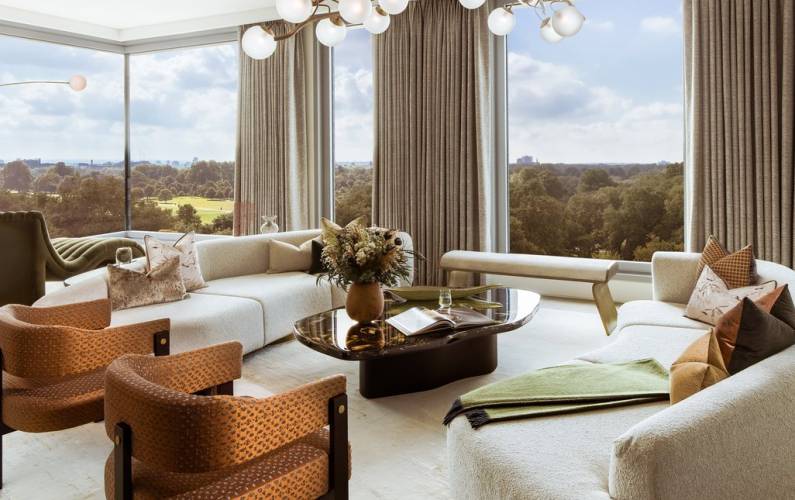 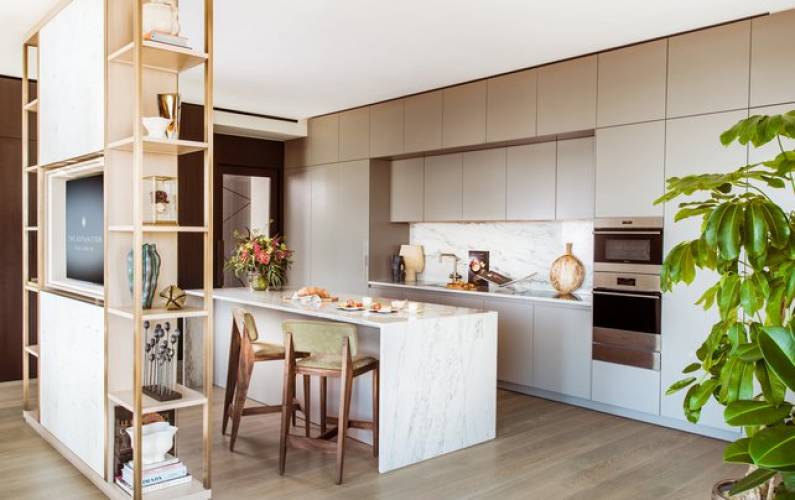 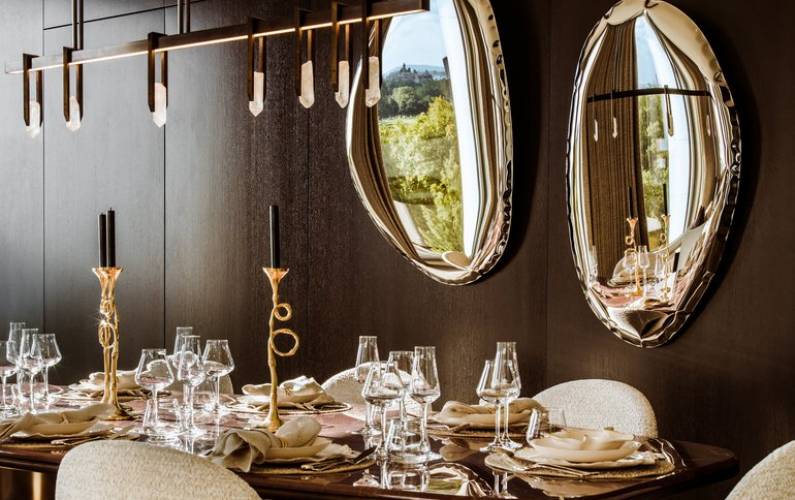 Wellness, workouts and wind down, all under one roof.

Entry to the building is seamless, secure and discreet, with a private canopied driveway on the quiet, tucked-away Bryanston Street, where you’ll be met by the doorman. There’s 24-hour security, valet service and underground parking available for every apartment.

A dedicated security team provides monitored CCTV surveillance 24-hours a day, seven days a week, to give residents utmost piece of mind. Entry into all parts of the building are access controlled and keys are held in biometrically accessed key safes, providing an auditable trail across all building entrances and touchpoints.

The Bryanston is managed by Rhodium, the luxury residence management and concierge company. Services are professional and
wide-ranging and will seamlessly complement with residents’ private staff, covering everything from sourcing experts for personal training, spa and wellness, to booking restaurants and travel, to apartment maintenance and deliveries.

The residents’ gym and private training rooms are serviced by international personal trainers MER World. They feature a wide range of exercise equipment by Technogym and LifeFitness, and offer flexibility for private exercise, classes or one-to-one training.

Bryanston residents can book the cinema suite for private screenings. It seats up to 10 people and features Sony’s latest 98-inch ultra high-definition screen along with an immersive custom surround sound system. Sky+ HD is available, along with a 4K capable Blu-Ray player.

A magical play space, designed to engage all senses and enhance learning. The Bryanston Play Space can be booked for private functions, along with the cinema or on its own.

Two generous interconnecting meeting rooms for business meetings complete with welcoming reception area. There’s a service kitchen attached, so it’s the ideal setting to host catered business lunches or private dining events. Discreet bookings are available through the concierge who will make all the necessary arrangements for you.

Neighbourhood around The Bryanston 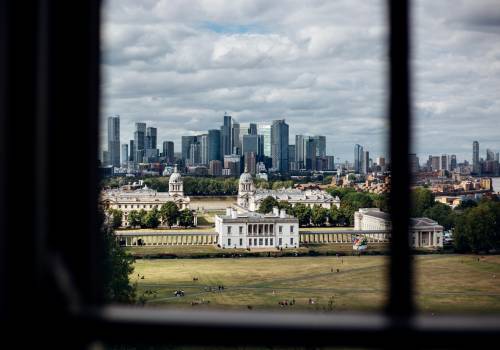 Floor plans for The Bryanston 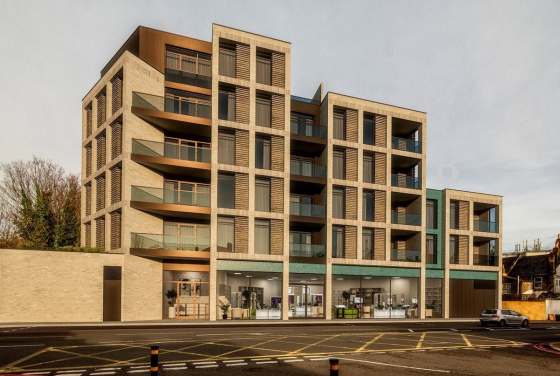 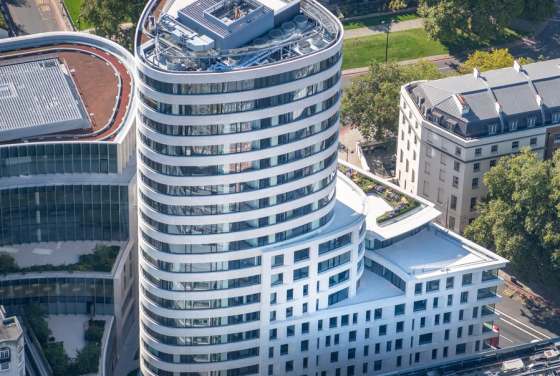 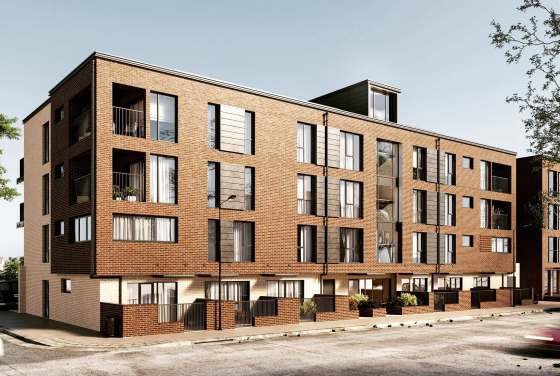 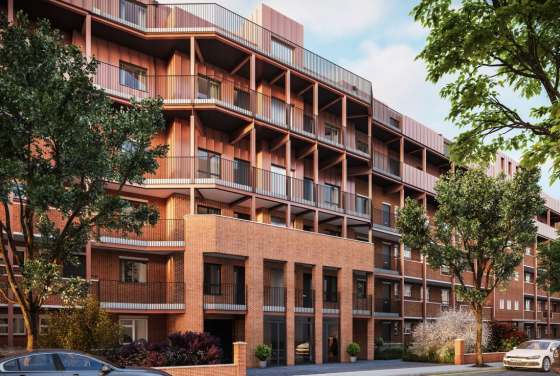 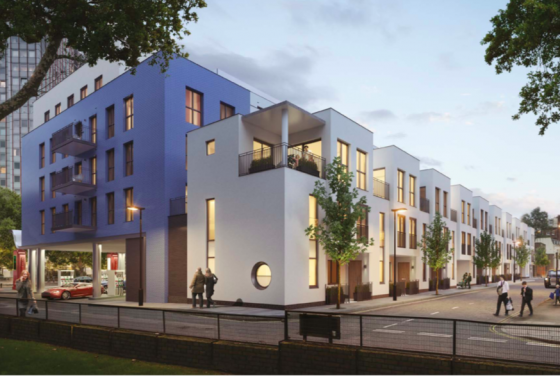 FAQs about The Bryanston