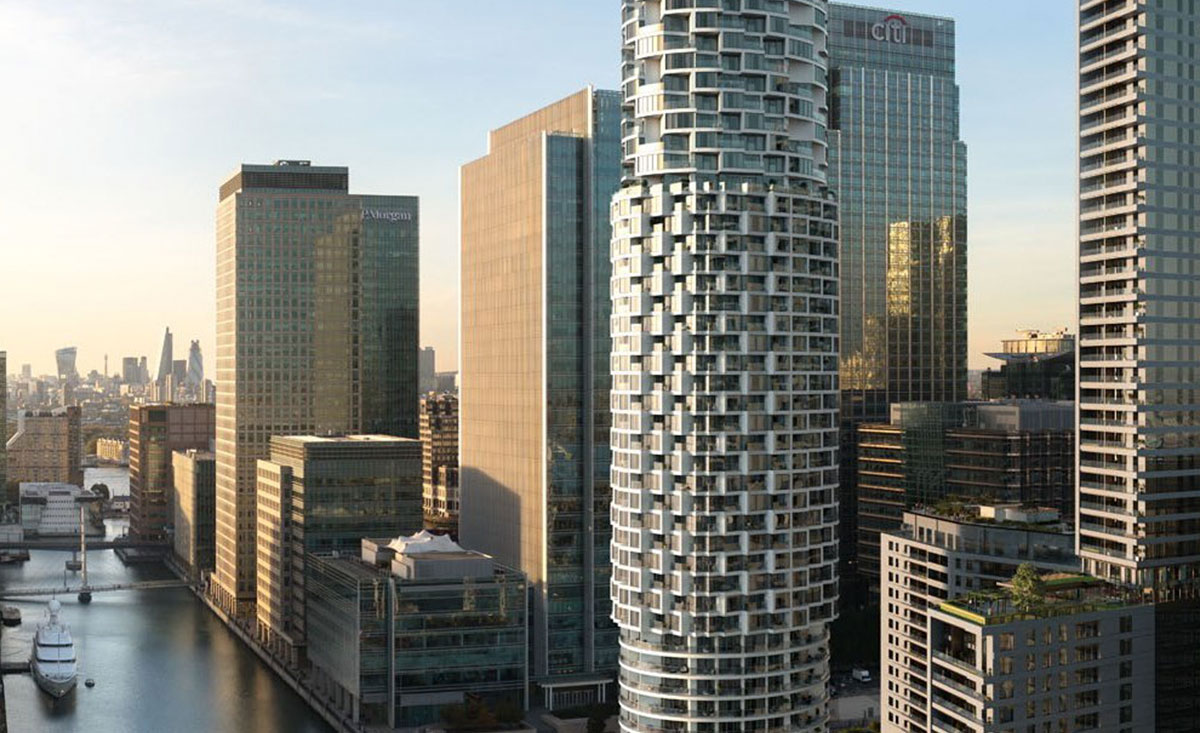 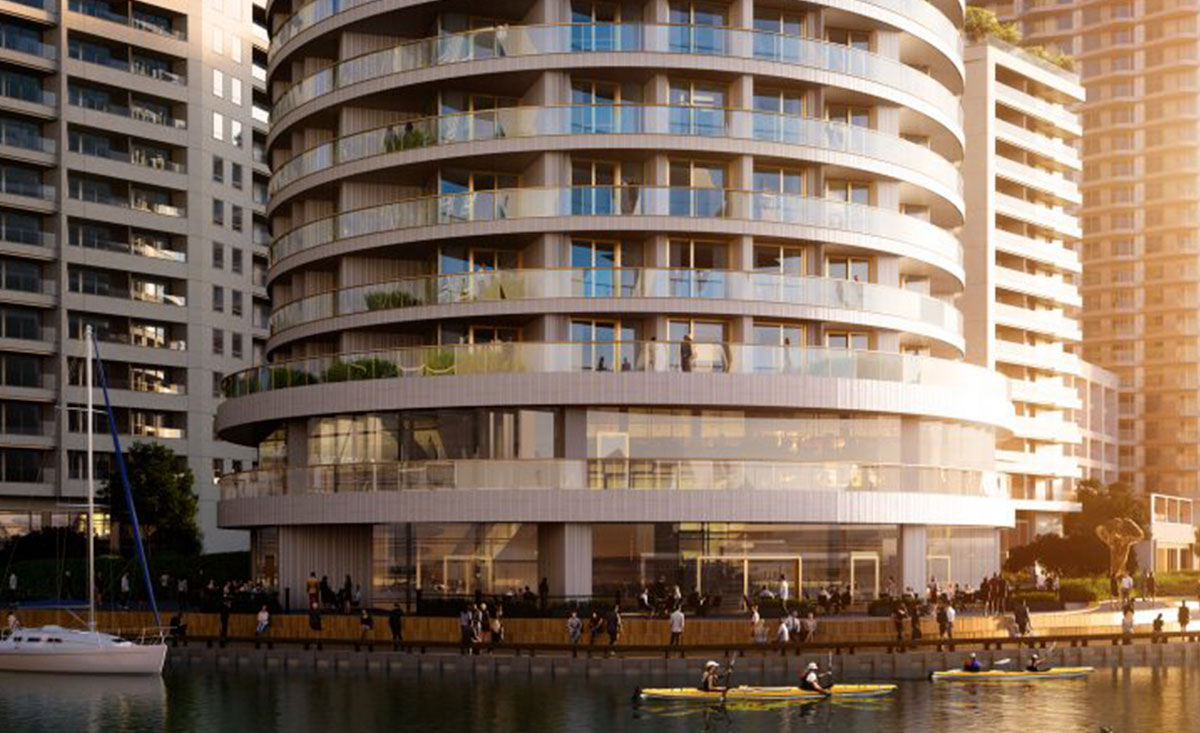 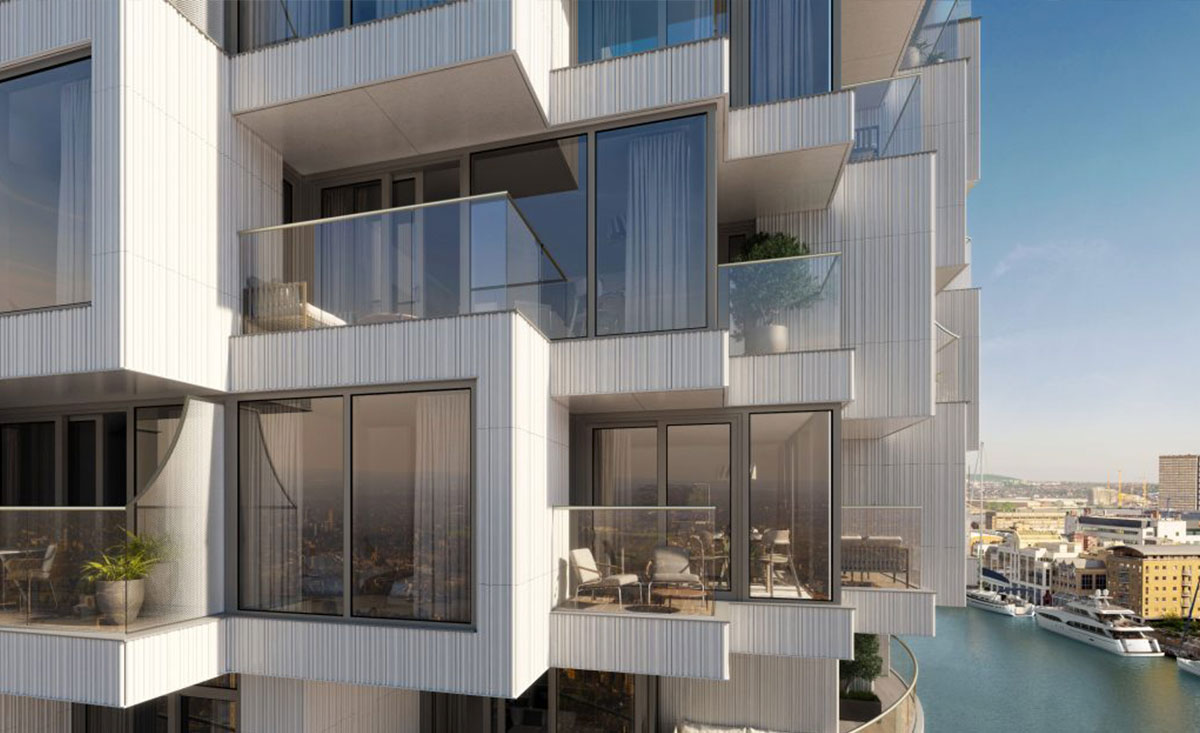 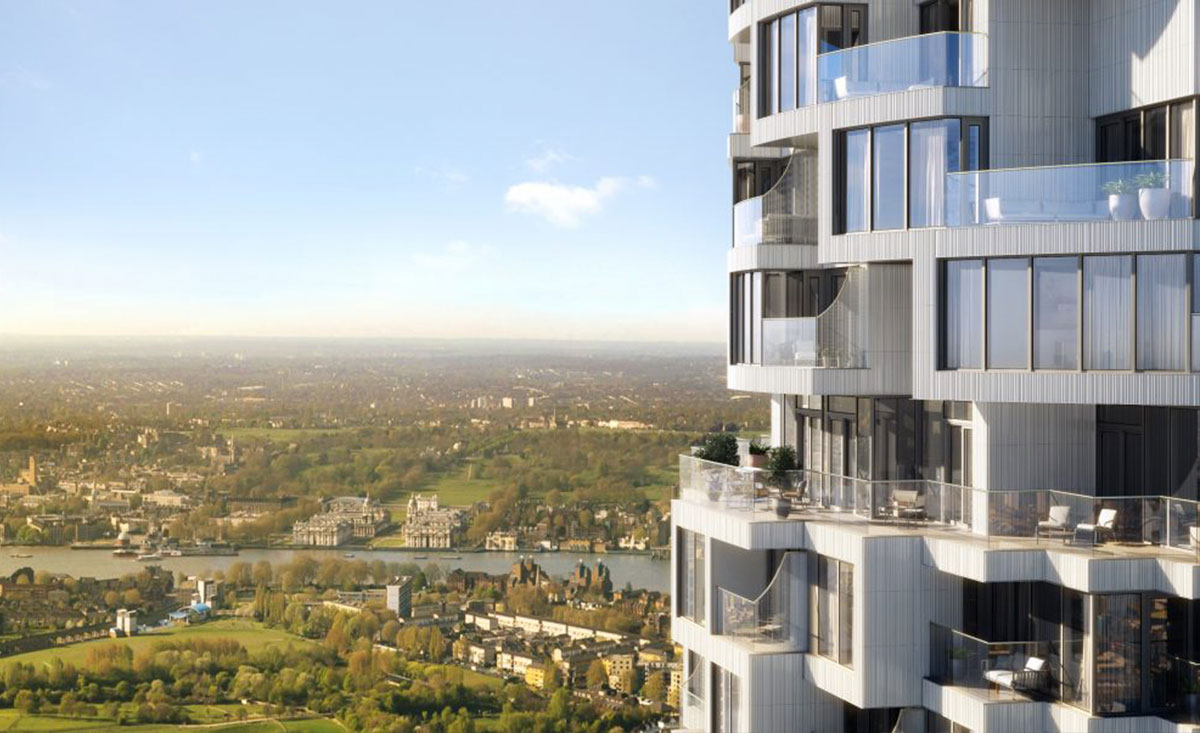 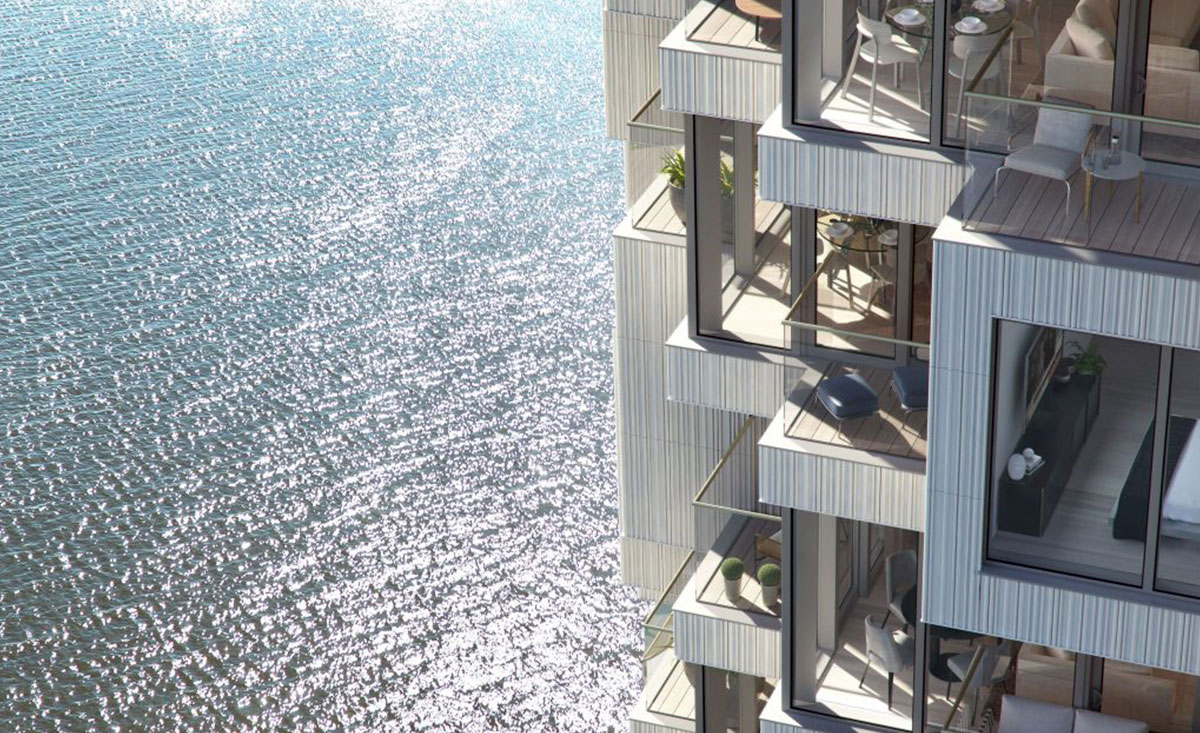 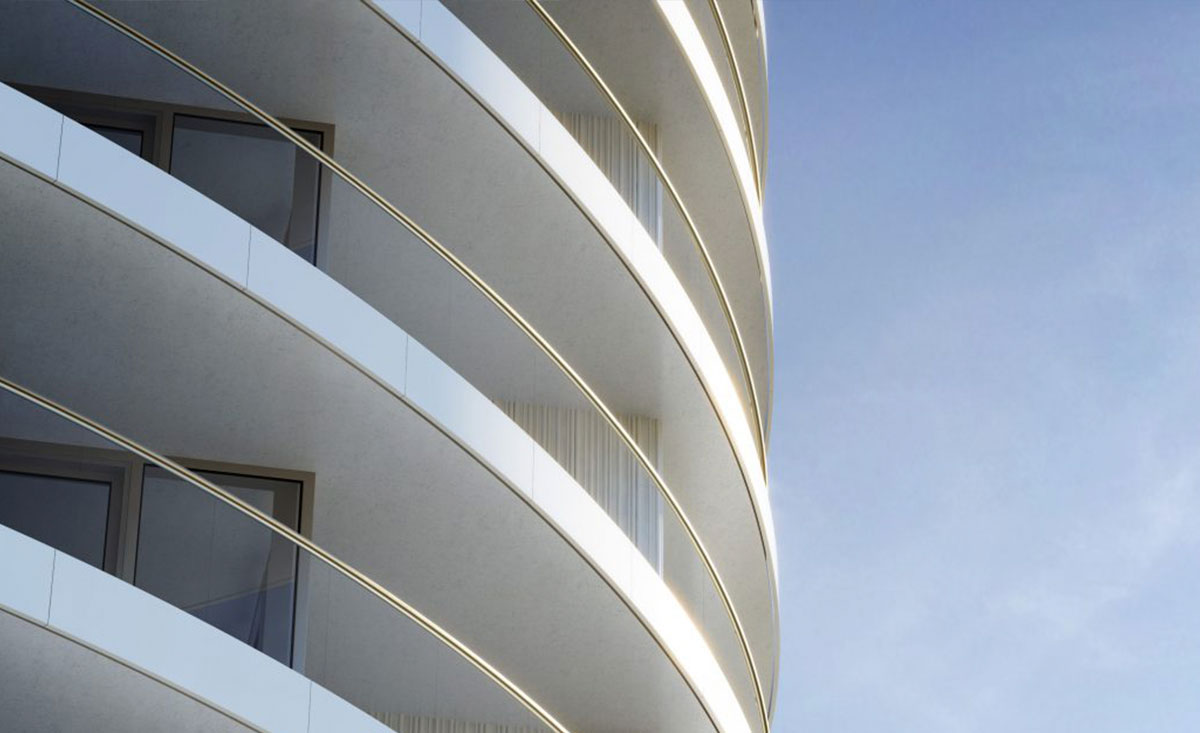 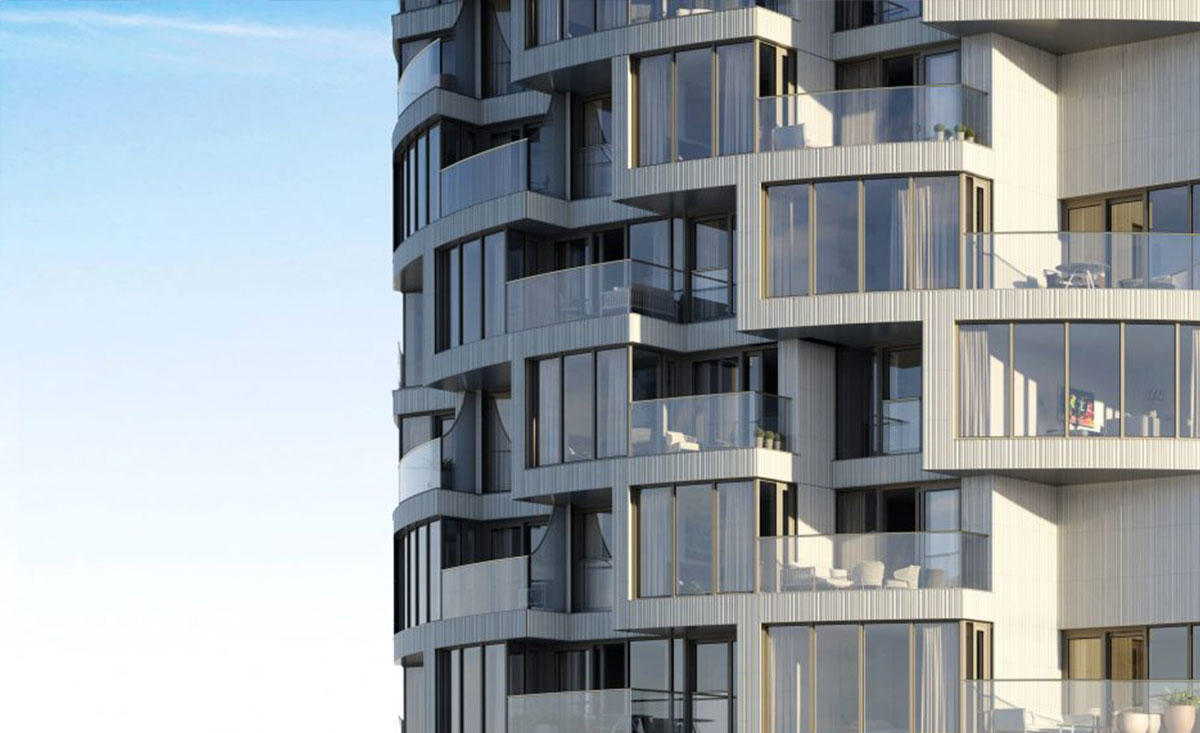 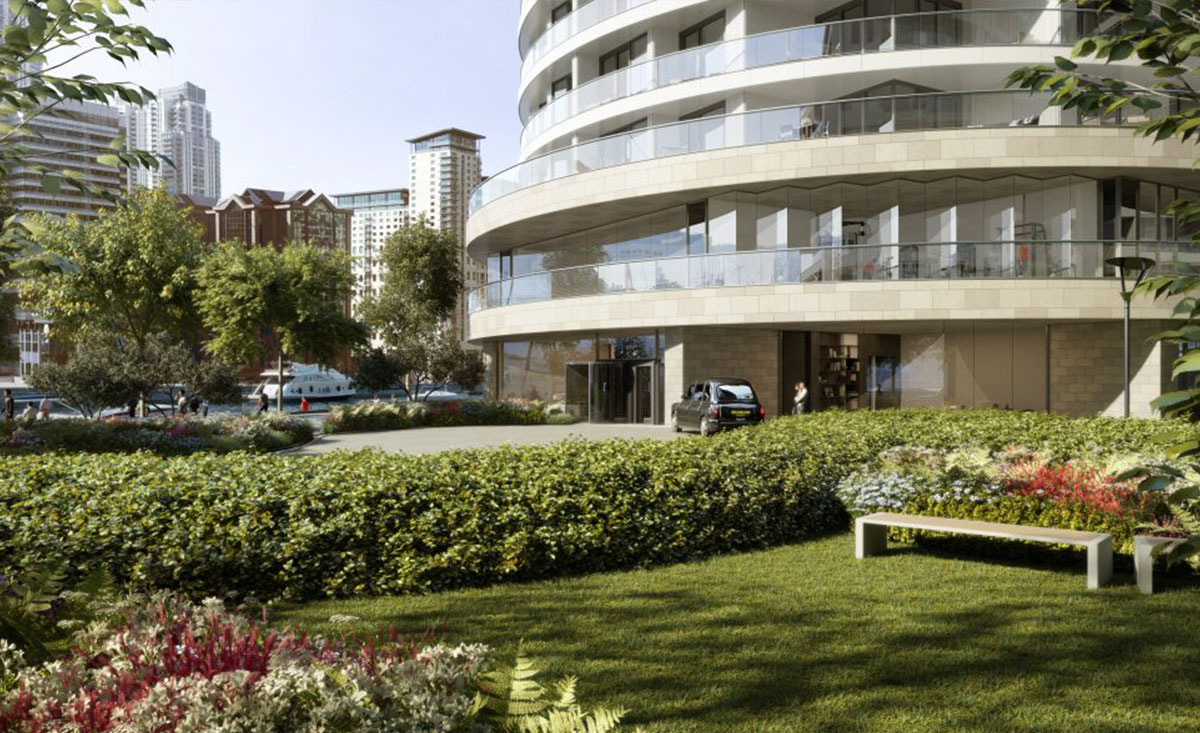 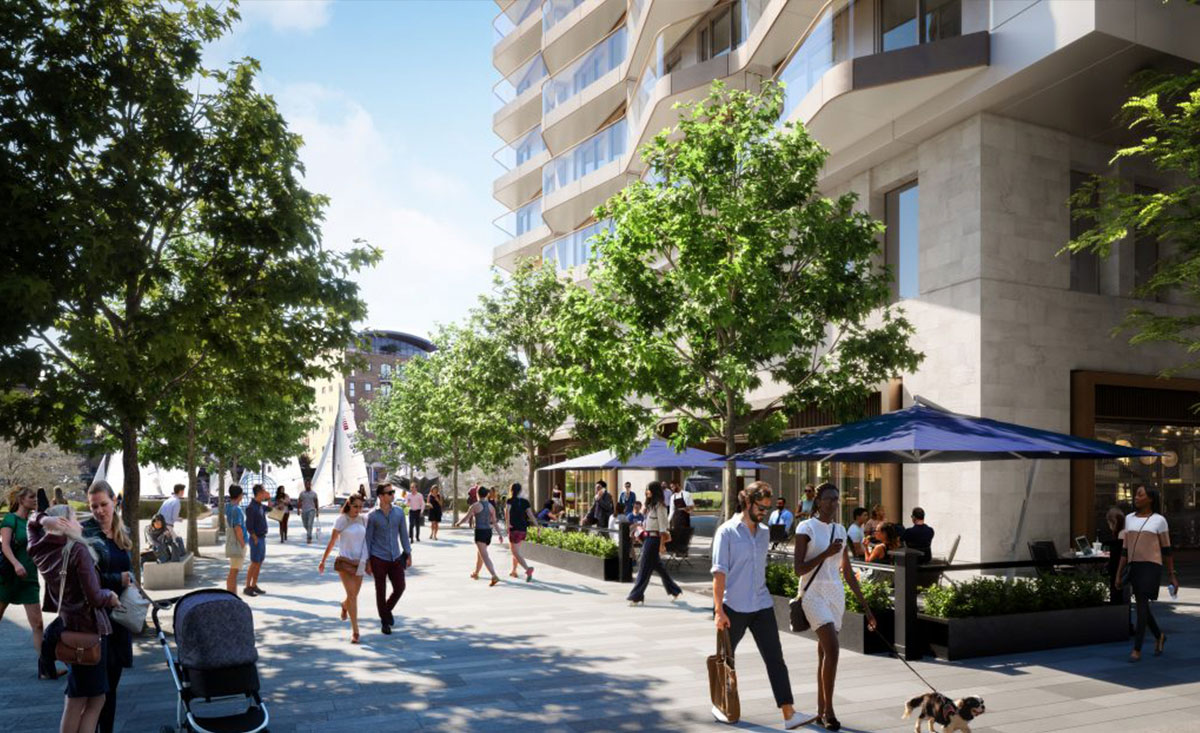 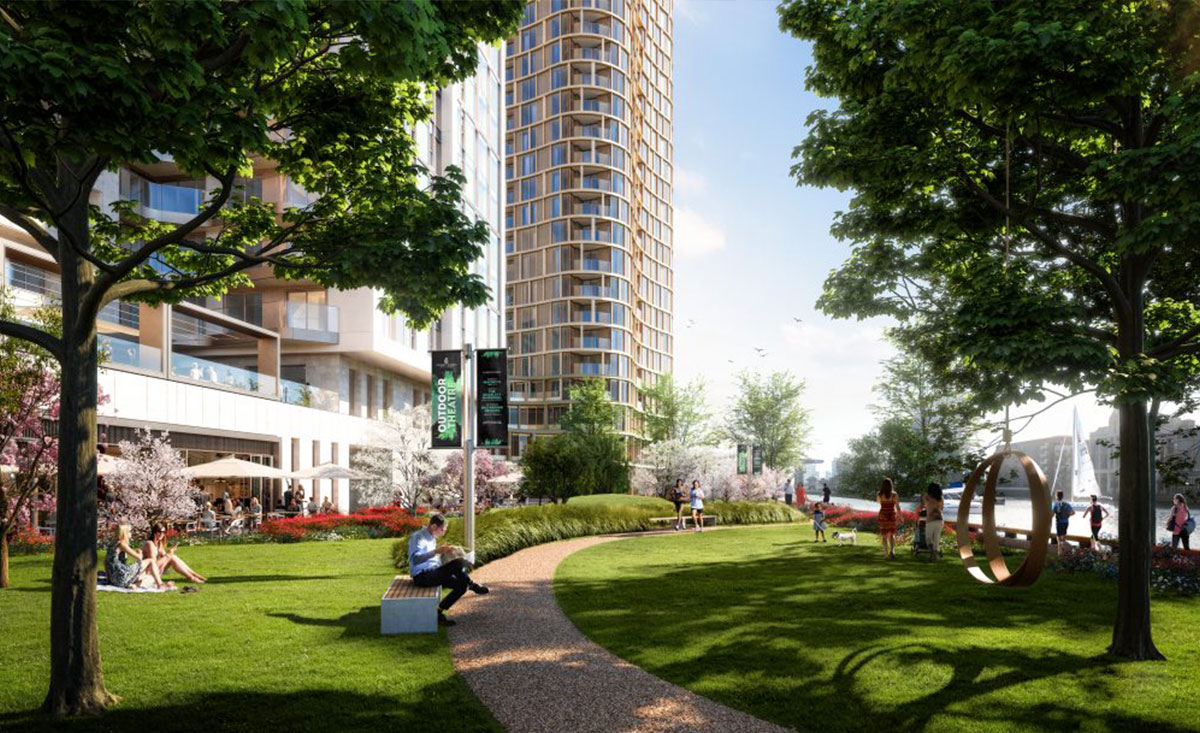 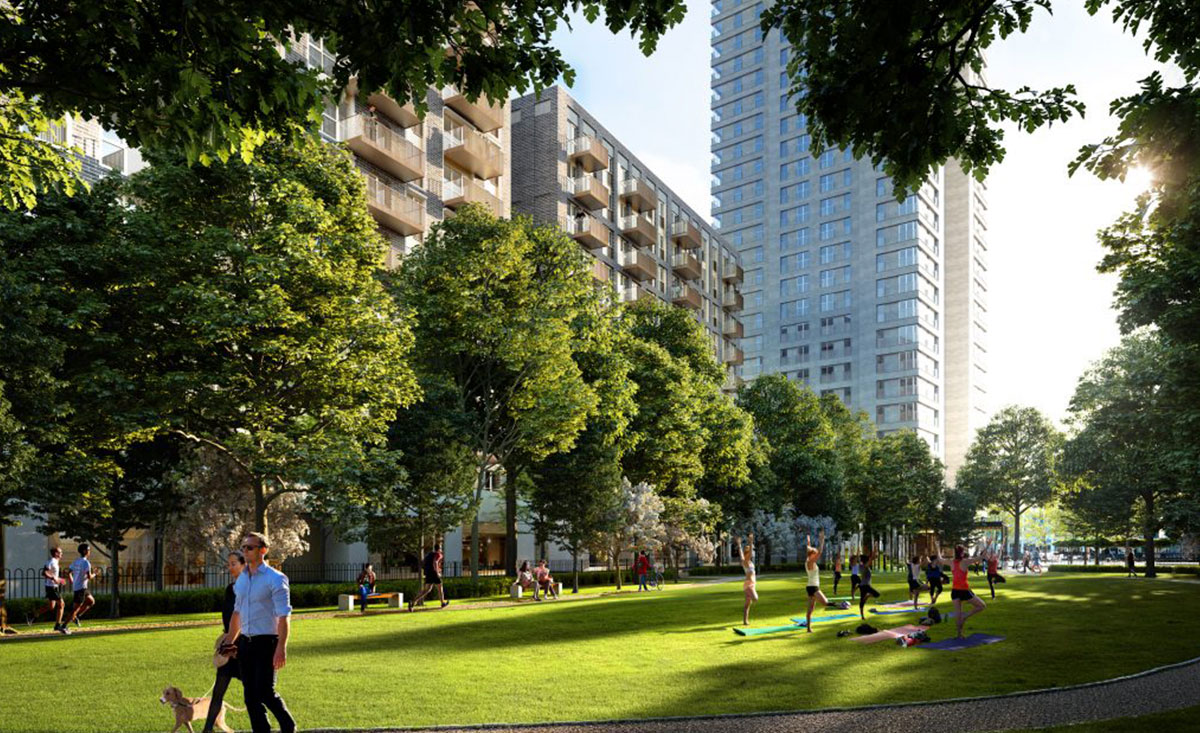 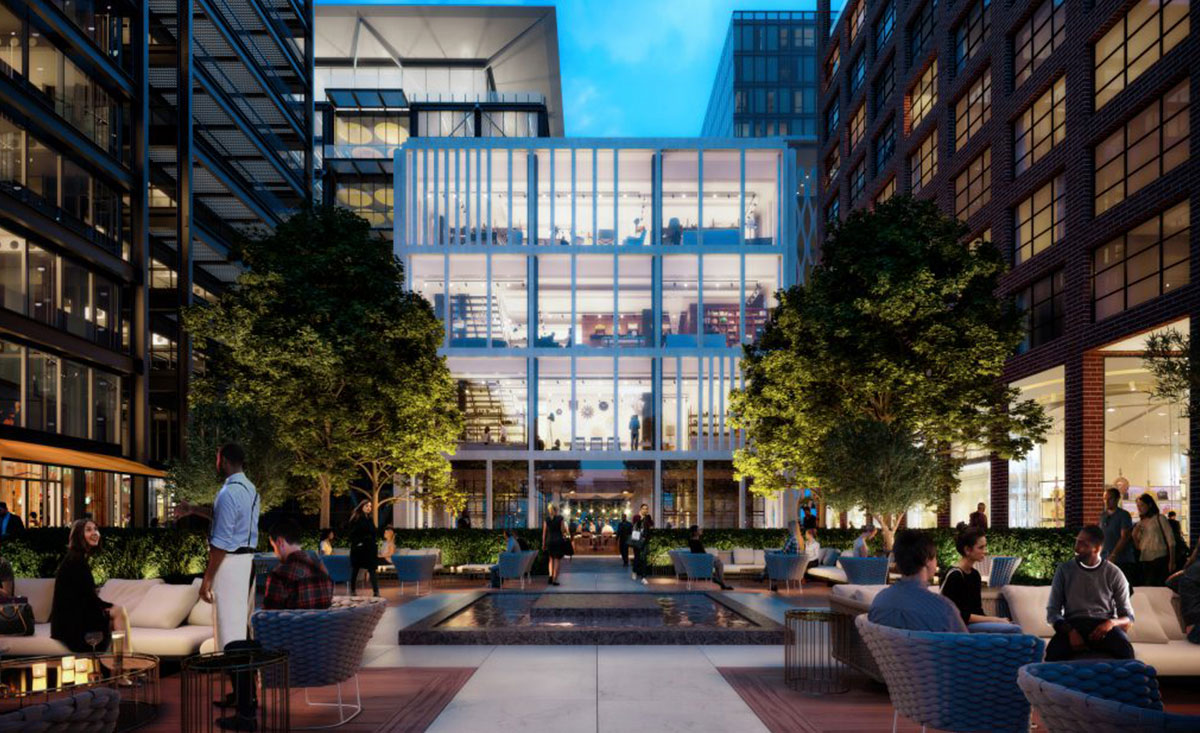 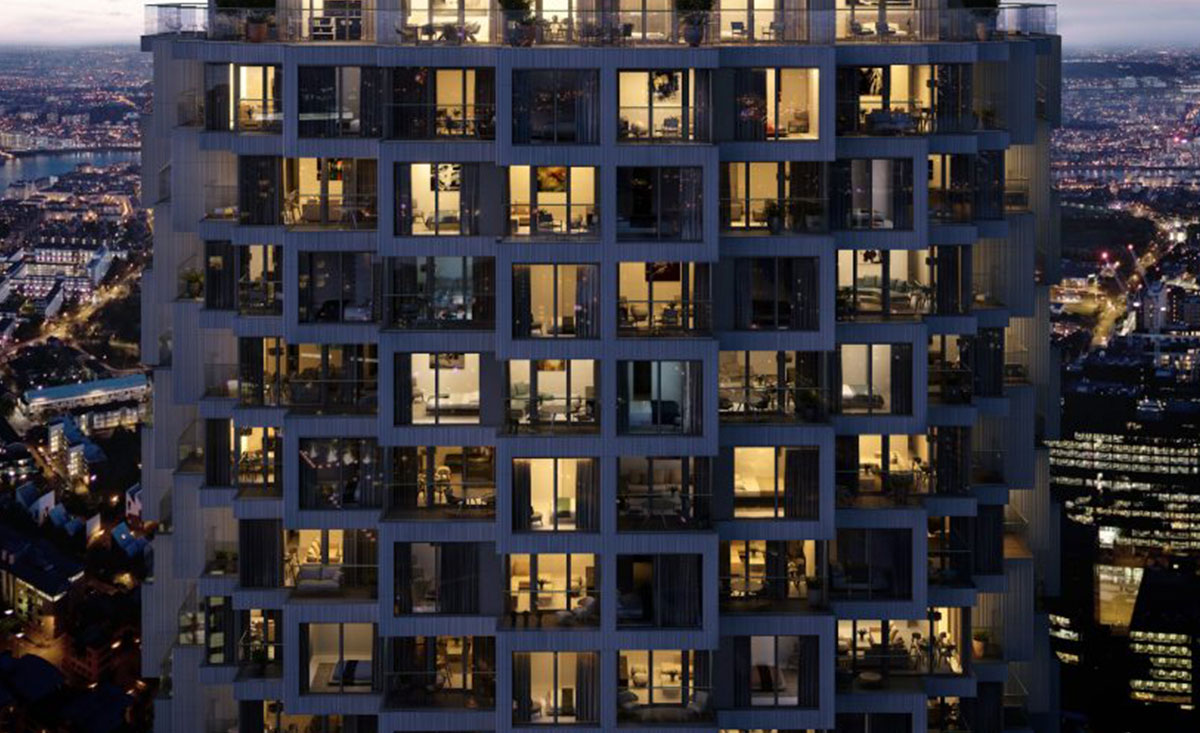 Multi-award winning development and the proud recipient of awards in architecture, design and for best development in 2021

Properties in this development on 06 October 2022

The 58-storey tower will comprise 483 apartments and penthouses. Apartment types in the building: 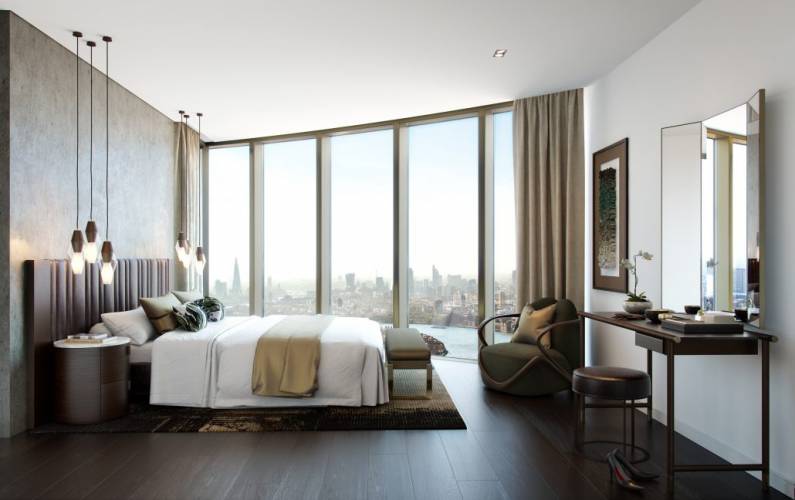 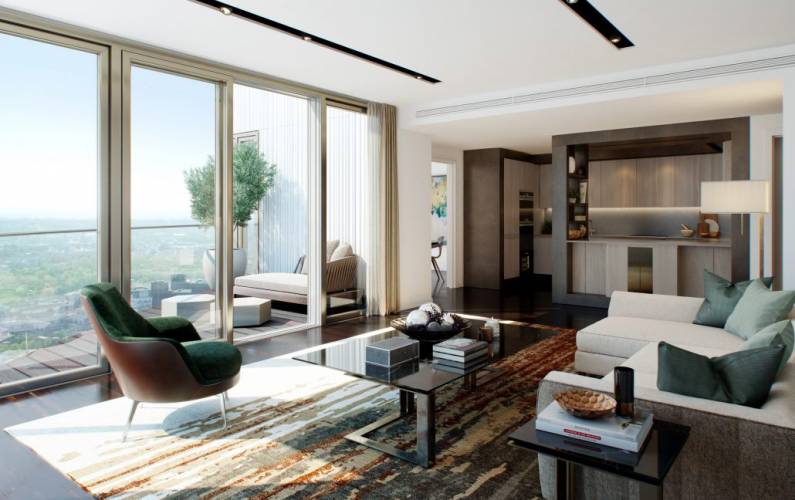 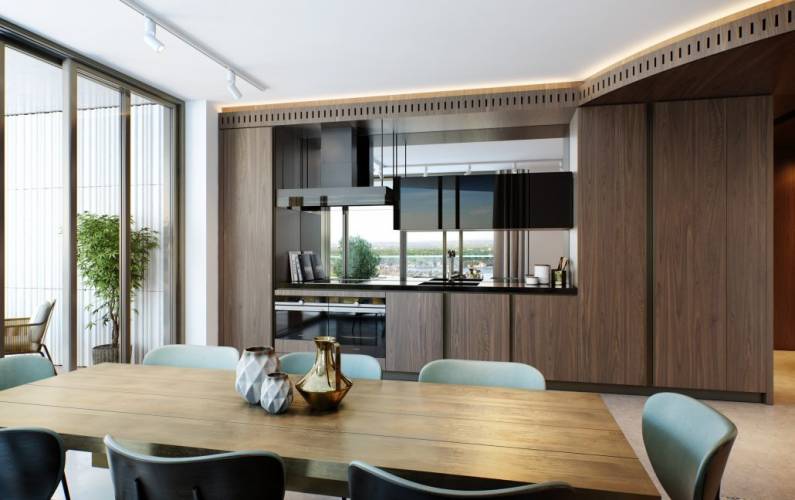 The Loft apartments are located on floors two to nine and feature interiors by Bowler James Brindley. The Lofts are designed to make the most of the connection to the surrounding green spaces and waterfront, with generous wraparound terraces framed by fluted terracotta panels. These apartments also feature contemporary, free-flowing spaces, complete with sliding walls, cool resin floors and unique mother of pearl clad bathrooms.

Cluster apartments form the heart of the building, located on floors nine to 32. With striking interiors by Goddard Littlefair, the Cluster typology contains the greatest variety, with the lower levels connected to the parks and water; the higher floors with the sky. The top floors (33 – 57) are home to the Bay apartments, which all boast double-height terraces set back into the building. These properties also feature interiors by Goddard Littlefair, with elegant palettes and cool textures, including concrete walls, timber panelling, pivot doors and natural stone, all of which maximise light.

One Park Drive will offer state of the art amenities designed by GA Design, split over the ground and first floors. Residents will benefit from a sophisticated entrance lobby with 24-hour concierge services; library, cinema room and lounge on the ground floor, whilst the first floor houses an exclusive residents-only health club. Framed by floor-to-ceiling glazing, this calming space, which includes a 20-metre pool, gym, studio space and spa, invites stunning views of the surrounding parks, gardens and water.

Price trends for One Park Drive

Neighbourhood around One Park Drive 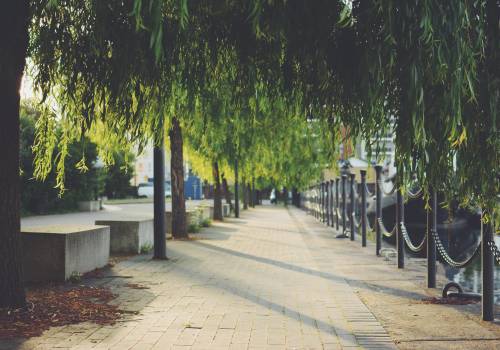 East London, home to the many most sought-after neighbourhoods in the capital, is often called a paradox. It is an area where the modern age meets history, and people of different incomes, interests, and believes perfectly live together.  More about East London →

Last apartments on sale. Leave an application and we will tell you about available apartments for sale.

Register your interest on this website to be the first to know about the best offers.

Last apartments on sale. Leave an application and we will tell you about available apartments for sale.

Register your interest on this website to be the first to know about the best offers.

Last apartments on sale. Leave an application and we will tell you about avaiable apartments for sale.

Development of the Year 2021

The award judges, who include architects from Assael, AHMM and Pollard Thomas Edwards, said: “One Park Drive, designed by Herzog & de Meuron, is the signature building of the new district and one of London’s most distinctive residential towers. Positioned on a prominent dockside plot on Wood Wharf, the new neighbourhood of Canary Wharf, One Park Drive represents a unique architectural achievement, which has been designed to be the very best in city and waterside living.

“One of the most challenging building types to construct, the circular, geometric form was chosen to clearly distinguish itself from the commercial buildings of Canary Wharf, meaning it cannot be mistaken for anything other than a place where people live. The four distinctive zones on the outside reflect how well the living spaces work on the inside.”

Brian De’ath, Managing Director of Residential Sales at Canary Wharf Group commented: “One Park Drive is an iconic building that has already become an instantly recognizable part of London’s skyline due to its unique architecture. Due to the prominence of its position, at the entrance to Canary Wharf’s new residential neighbourhood, we wanted to create a signature building that would act as a marker for the wider residential offering across the Estate. These awards will be added to others already secured this year, capping an outstanding period and further demonstrating One Park Drive’s credentials as a truly outstanding residential address.”

One Park Drive has received two awards at the 2021 International Property Awards.

The development was awarded prizes in the Best Apartment and Best Residential Development categories.

The panel of expert judges considered the location and contribution of the development to its surroundings, sustainability factors, supporting press activity and aesthetics with an additional emphasis on internal layout and specifications within the Best Apartment category.

The award highlighted One Park Drive’s three-bedroom Bay Apartment within the Best Apartment category, the typology can be found on the upper floors with double-height balconies and exceptional views. 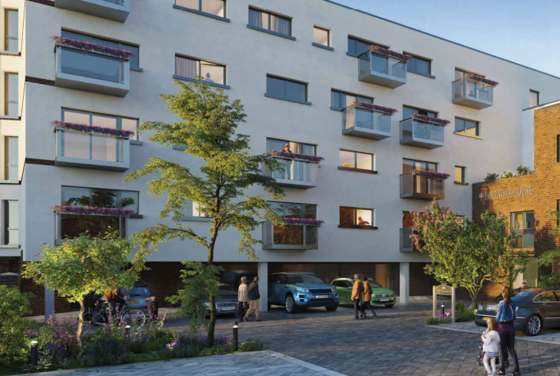 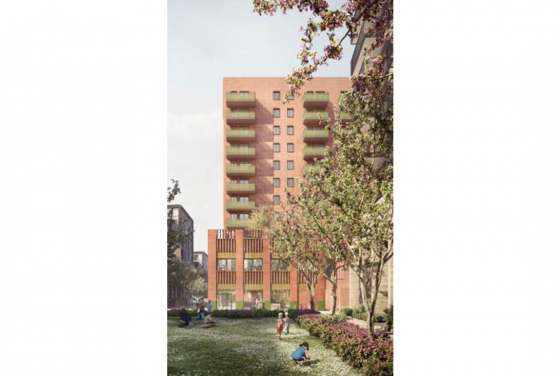 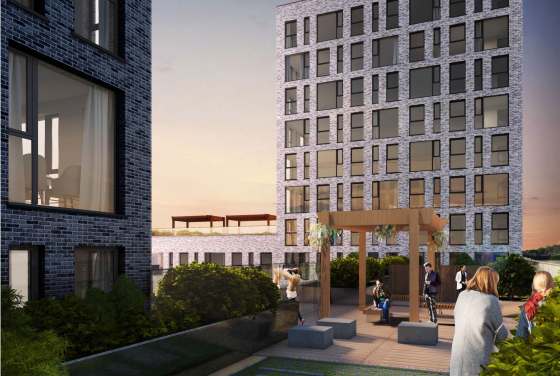 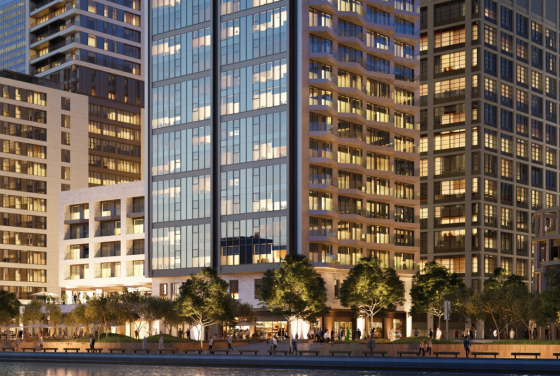 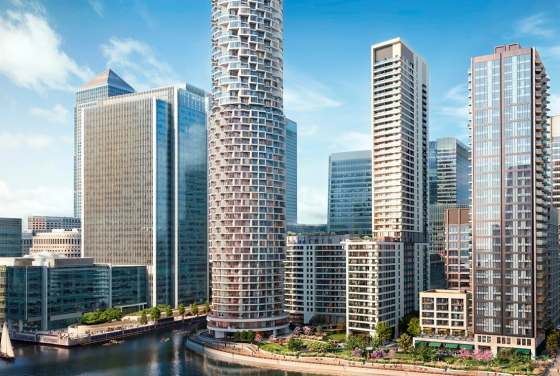 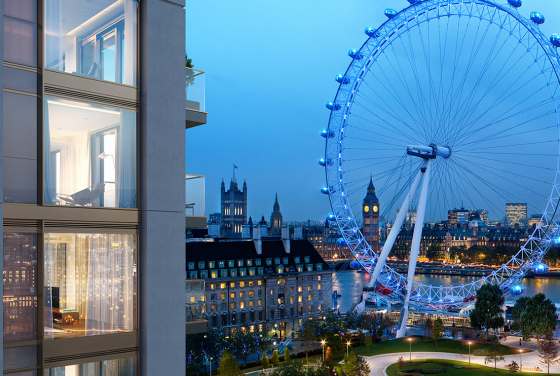 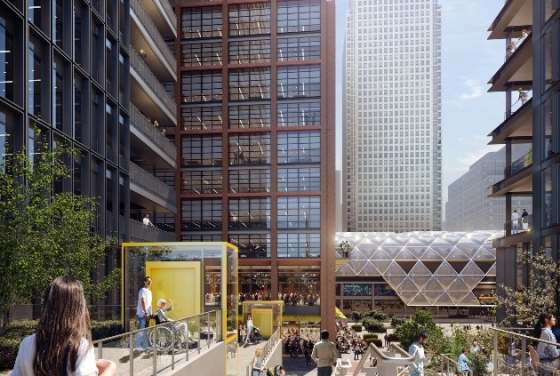 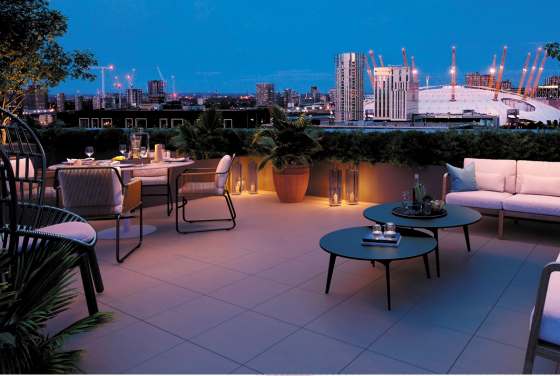 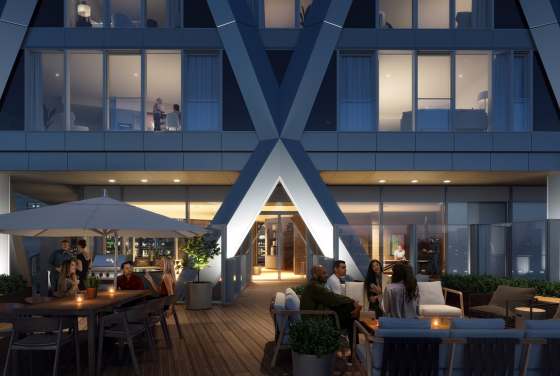 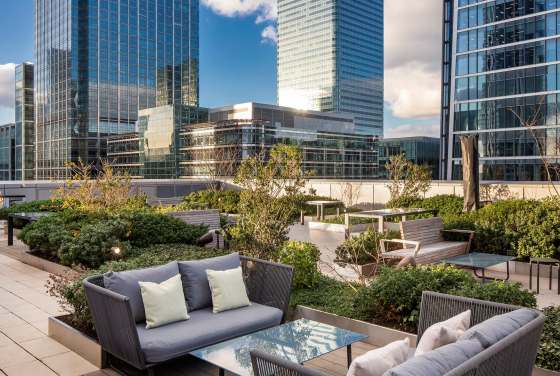 FAQs about One Park Drive